Devi Shakti or Adi Para Shakti can conquer all the evil powers. According to Hindu mythology, there was a buffalo-headed demon, Mahishasur. He gained a boon from Lord Bhrama, that no man could kill him. Once, in the battle between the gods and the demons, Mahishasur defeated all the Gods. To maintain a balance in the universe and conquer evil powers, there was a need to defeat evil powers. So, to kill Mahishasur, all the divine energies of Gods combined into Goddess Parvati to form Goddess Durga.

Goddess Durga, armed with ten different weapons, one in each hand and riding on a lion, began a fierce battle against Mahishasur. Even though she was a woman, nothing could stop her, and eventually, Maa Durga killed Mahishasur. This is how Maa Durga got identified as Mahishasur Mardini. The nine-day battle between Maa Durga and Mahishasur also signifies the Navratri festival and is celebrated as Navratri, the victory of good over evil.

What is Shakti Peeth?

Devi Sati was an incarnation of Adi Shakti. It was in her destiny to become Lord Shiva’s wife. King Daksha the father of Sati, didn’t want Sati to marry Lord Shiva. So, he dis-approved Devi Sati and Lord Shiva’s marriage. After marriage, Devi Sati started living her married life at Mount Kailash with Lord Shiva. Daksha got enraged, he felt very insulted and so, he decided to take revenge.

Soon after Sati’s marriage, Daksha Prajapati organized a yagna. Except, Lord Shiva, he invited all Gods. Sati was very unhappy to know about this. She decided to visit her father and confront him. Lord Shiva, attempted to stop her, but she requested him to allow her to go. Devi Sati, on arrival at her father’s house, was not welcomed affectionately by her father. He even started insulting Lord Shiva in the yagna ritual. Sati was so enraged by her father’s behavior, that she couldn’t tolerate those insulting words for her husband. She then sacrificed herself in the yagna fire. As a result of this, the sacred Yagna became unholy.

Lord Shiva became very furious after knowing about Sati’s death. Lord Shiva created Veera Bhadra from his hair strand. Veera Bhadra cut off Daksha’s head and threw it in the same Yagna fire. However, a sacred yagna can’t be left incomplete. So, Daksha was brought back to life, by placing a goat’s head in place of his head.

Lord Shiva, kept Sati’s body on his shoulder and started wandering in the whole Universe. All Gods were very concerned seeing Lord Shiva neglecting his celestial duties. So, they requested Lord Vishnu to stop Lord Shiva and restore the balance in the Universe. At that point, Lord Vishnu with his Sudarshan chakra cut Sati’s body into 52 pieces, of which 51 dropped on the earth at 51 different places, which became holy 51 Shakti peeth. At each Shakti Peeth, there is a Maha Kali or Maa Shakti temple and a Kaal Bhairav temple. Kaal Bhairav is a fierce form of Lord Shiva, who guards each Shakti Peeth. This is how shakti peethas were formed and the Ambaji temple of Gujarat is one of them. It’s believed that Devi Sati’s heart fell at this place. 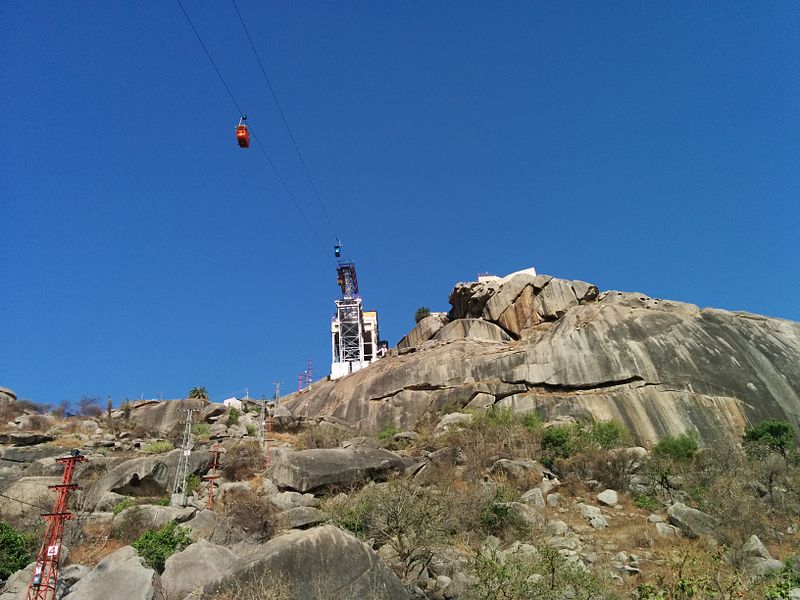 Around 6 to 7 km away from the Gabbar hill is the Ambaji temple. Here, on the auspicious full moon day of Hindu month Bhadarva, a large fair is also held. Many devotees from across the country visit here to worship Maa Shakti. Ambaji temple Gujarat is the best place to visit during Navratri. In Navratri, a large number of people visit Ambaji. They also perform Garba there. On Maha Ashtami, the eighth day of Navratri, Maha Yagna is also performed in the Ambaji Temple. 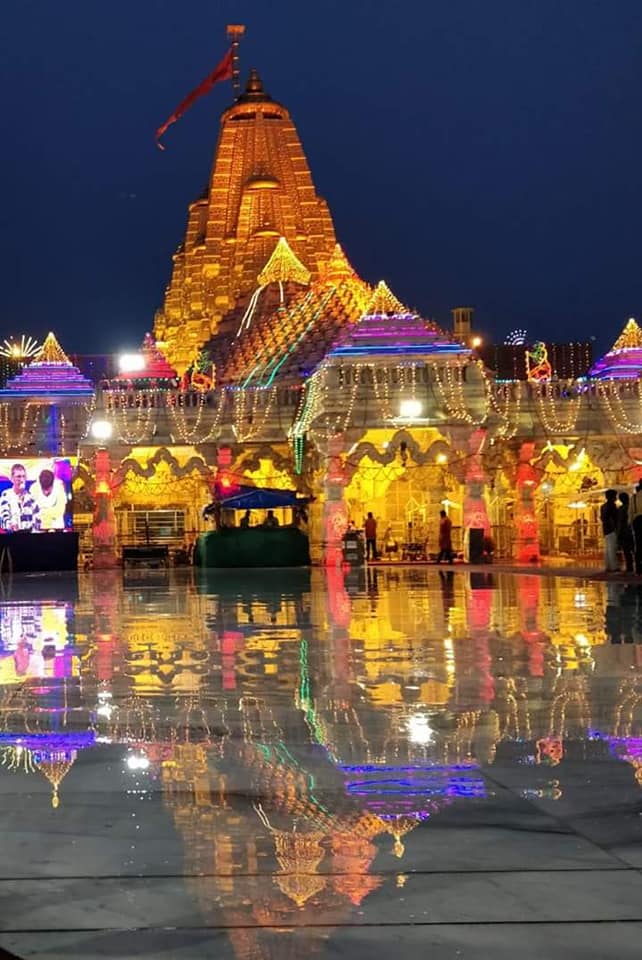 Visit this holy Shakti Peeth Ambaji Temple of Gujarat once, you will feel blessed to worship this divine, feminine form of Maa Amba.

Nearby places to visit in Ambaji

Kumbhariya Jain temple is located around 2 km away from Ambaji Town. It has a historical Jain Shwetambar temple of Neminath Bhagwan, which is one of the heritage sites of Gujarat.

Kamakshi Devi Temple is near Kumbhariya Jain Temple on the Khedbrahma National Highway. The temple has all 51 shakti peeth and various incarnations of Maa Adhya Shakti.

Kailash Tekari is a pilgrimage place nearly 2km away from Ambaji on the Khedbrahma Highway. A stone gate Mahadev Temple is located on the top of Kailash tekari.

Maan Sarovar is located behind the main Ambaji temple, where the devotees take a holy bath.

Mount Abu is a very famous hill station located in the Aravalli mountain range in the Sirohi district of Rajasthan, near the Gujarat border. It is a place with a very soothing climate where you will see waterfalls, lakes, rivers, and forests.