Garba, the popular and traditional dance form of Gujarat, is performed in Navratri by worshipping the nine forms of the goddess Durga. The festival lasts for nine nights. Garba is the soul of Gujaratis which has been performed by both men and women across the world. But what if due to established traditional norms, people of some region think that Garba can only be performed by men to please the goddess to bring rain? What if men start assuming that if women perform Garba it brings bad luck? 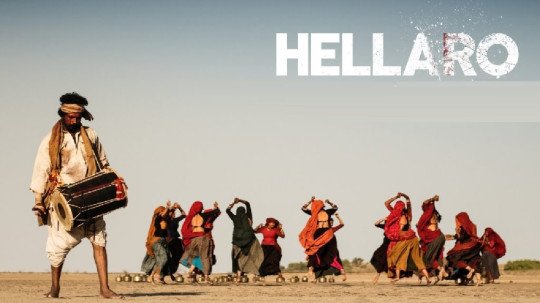 This is the storyline of the national award-winning movie Hellaro. Hellaro meaning the outburst. The movie presents various social issues of society such as disrespect of women, marital rape, casteism, gender inequality, discrimination with a widow, and superstition.

The movie showcases the culture of Kutch that happened at the time of our ancestors. The story shows a young woman Manjari (Shraddha Dangar), who is told to cut off her wings of dreams and desires on her wedding night itself by her husband (Aarjav Trivedi). Because women of deserted village Samarpura, are supposed to be confined to their houses. Every night, the men in the Samarpura perform Garba with swords in hands to please the goddess for rain while women have to stay indoors. The only time they’re allowed to leave the house is in the morning, when they go out to fetch water from a nearby pond.

Once on their way to fetch water, they find an unfamiliar man trounced in the sand due to weakness. They first hesitate to help him but of sympathy, Manjari offers him some water and saves his life. The stranger thanked the ladies and introduces himself as Mulji (Jayesh More) who is a born low-caste dholak (drummer). Manjari requests him to play the drum and on the rhythm of his dhol, she starts performing garba. Later, other women also follow her. Daily, the women meet Mulji and do the garba in the deserted land at a distance from the eyes of the villagers. One day their secret comes out and what happens next, to find out you should definitely watch this movie.

From the beginning to the end of the movie you will see Garba as a representation of their pain and the inner voice, of the women of the village who are struggling for their identity and freedom. As a directorial debut, Abhishek Shah has done a brilliant job for which this movie has won the National Film Award.

Hellaro is a masterpiece. All its actors, their dialogues, costumes, choreography, and screenplay give an exact touch to the rural community of Kutch. The story and screenplay of the movie are so realistic that it successfully catches audience attention. The screenplay leaves the audience to sympathize with the women of kutch culture in the past. The background music and songs go well with the movie. Sapna Vinani Raat sung by Aditya Gadhvi will give you goosebumps. The movie focuses on the era of the 1970s. Some of the customs are obsolete in the 21st century but still present in some rural regions.

My opinion on Hellaro Gujarati Movie

Hellaro is an emotional movie that highlights problems that women face in our society which needs to end. It is a good movie to watch with the family. The movie has a solid social message that’s presented by the brilliant performance of all the characters. The movie also has light fun and comedy in its dialogues. The only thing I didn’t like about this movie is its uncertain end, which raises my expectations to see its sequel in the future.